Writing in the Laboratory: Ecopoetics and Metabolism

Commemorating the 10th Anniversary of the Faculty of English, the Department of American Literature and the Canadian Literature Research Unit cordially invite everyone to a meeting with Adam Dickinson, Canadian poet and critic, author of Anatomic and The Polymers, who will deliver a talk titled “Writing in the Laboratory: Ecopoetics and Metabolism”, followed by a reading of his poetry.

Situated at the intersection between science and poetry, this artist’s talk will feature the poetics and research involved with a writing practice that interweaves treatments of local and global metabolism, implicitly proposing that renovated approaches to environmental and social problems in the Anthropocene are enlivened by thinking and writing immersively within their biological, cultural, and historical contexts. Through collaboration with scientists and ongoing laboratory experiments (variously involving heat stress, chemicals, and my own microbes), this poetic practice attempts to reimagine problems associated with climate change, antibiotic resistance, chemical and plastic pollution, among other concerns as they are legible in a human body (my body) and in the larger context of biological, social, and political activities. Theorized as a multidimensional performative “metabolic poetics,” in which the work of art increasingly emerges from the metabolic work of a body in response to laboratory work, this lecture and reading will present an ecopoetics concerned with how we write the environment and how the environment writes us, and the potential for poetry to offer reimagined forms kinship and resistance.

Adam Dickinson is the author of four books of poetry. His latest book, Anatomic (Coach House Books), which won the Alanna Bondar Memorial Book Prize from the Association for Literature, Environment, and Culture in Canada, involves the results of chemical and microbial testing on his body. His work has been nominated for major literary prizes in Canada including the Governor General’s Award for Poetry and the Trillium Book Award for Poetry, and has been translated into Chinese, Dutch, French, German, Norwegian, and Polish. He has been featured at international literary festivals in Canada, Europe, and the United States. Along with Claudia Rankine (USA) and Valzhyna Mort (Belarus), he was a member of the jury for the 2022 Griffin Poetry Prize. He teaches English and Creative Writing at Brock University in St. Catharines, Ontario, Canada. 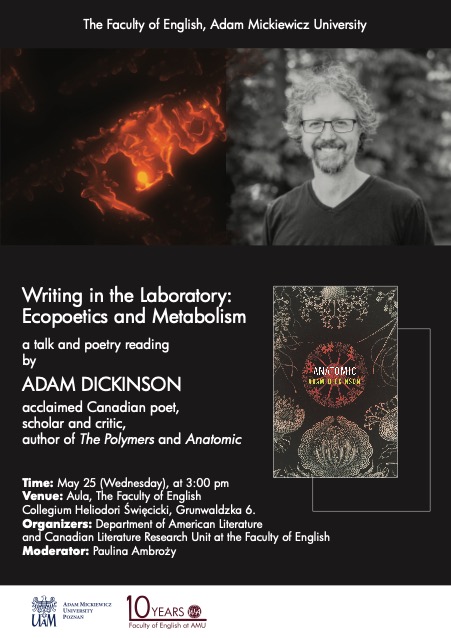