Twelve years in the heart of taiga

Prof. Jiří Chlachula, an archaeologist and geologist, came across the oldest traces of human settlement in North America and beyond the Arctic Circle in Siberia. The Moravian patriot has been working at the Faculty  Of Geographical and Geological Sciences of Adam Mickiewicz University for almost 10 years.

Prof. Jiří Chlachula spent 8 years in Canada and a total of 4 years in Siberia. Research by a scientist who got their phD at the University of Calgary in archaeology and on The University of Edmonton in geology resulted in an extraordinary find. In the early 1990s, the scientist came across the oldest traces of the presence of Indians at that time, preserved under the moraines of the last glaciation in the province of Alberta in western Canada, dated at around 30-40 thousand years ago.

- This information changed the way people think about migrations in the Pleistocene on the North American continent, though not all archaeologists, mainly conservative from the US, are accepting of the fact. The traditional model of the continent's colonization says, that the Indians appeared in those areas only 12 thousand years ago, after the last glaciation subsided. However, the natural conditions were very good enough already during the interstage for the migration of fauna and man from Siberia to Alaska through the dry Bering Bridge - said, prof. Chlachula.

Professors and researchers from the Mammoth Museum in Yakutsk have discovered the earliest human traces beyond the Arctic Circle, during the expedition in 2014 and 2019 in the valleys of the Jana, Indygirka and Kolyma. Dated at approx. 44 - 47 thousand years ago, they are about 15 thousand years earlier than the data so far derived from this area. One of the most important successes of the scientist was palaeomagnetic studies of aeolian and fossil sediment profiles of soils, carried out in the forest-steppe zone in south Siberia. They showed that the characteristics of sediments are related to global climate change in the span of 250,000 years. They are correlated with the pulsations of the glaciers on Greenland and with changes in the temperature of the water in the Pacific and the Indian Ocean.

Prof. Chlachula likes to work in Canada and Siberia, which he calls "Russian Canada", and in the Urals and Kazakhstan. His research focuses on human adaptation to the environment periglacial and contemporary environmental changes in central Eurasia. 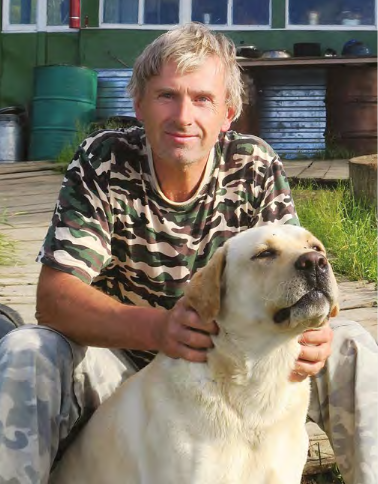 Jiří Chlachula near the Kolyma river during his expedition in 2019.

- In my work, I combine environmental research, incl geology and palaeontology with archaeology. As part of my interdisciplinary activity, I was mapping the environment in the protected areas of Altai, where I operate for the benefit of the development of eco- and geotourism - says, prof. Chlachula.

Moravia, Canada, Siberia - and where does Poznań come from? The first impulse to collaborate with AMU appeared in 2007 at the geoarchaeological site conference in Poznań. Joint research topics, dynamic and friendly environment, high ranking of the university and respect for academics in Poland encouraged the scientist who previously worked at the Masaryk University in Brno, to work as a visiting professor, and then in 2012 to accept a job offer at AMU.

During the pandemic, the professor gave lectures, among others for foreign students. The lectures turned out to be very popular - especially those titled "Wine and Environment". Their idea was created thanks to previous lectures in the field, which were organized in Moravia for students from Poland.

- In lectures about the environment and geographic aspects I also spoke about cultural traditions and the protection of nature of the region I come from and which I feel patriotic about - adds the professor.

Winemaking is one of the basic elements of Moravian heritage. In the fall it is worth going to Moravia and trying many species of traditional wine made from local grapes. Students of prof. Chlachuli are happy to come back there to try the richness of wine tastes at the local winemakers. Prof. Chlachula conducts research all the time, incl. paleoclimatic and concerning the contemporary climate. The scientist is going to continue work in Siberia (Yakutia, Chukotka, Kamchatka). He recently finished writing an article with his colleagues from AMU on global warming in the Northeast of Siberia, in the coldest zone of Eurasia. He would also like to come back to research about the earliest human colonization on the area around the Bering Strait, both on the American side North and Siberia.